What are the side effects of tattoo removal?

About half of the patients treated with Q-switched lasers for tattoo removal will show some transient changes in the normal skin pigmentation. These changes usually resolve in 6 to 12 months but may rarely be permanent. 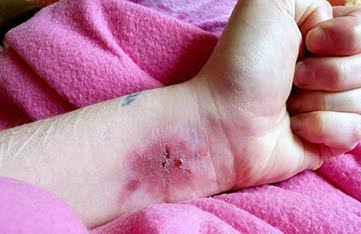 Hyperpigmentation is related to the patient's skin tone, with skin types IV,V and VI more prone regardless of the wavelength used. Twice daily treatment with hydroquinones and broad-spectrum sunscreens usually resolves the hyperpigmentation within a few months, although, in some patients, resolution can be prolonged.

Transient textural changes are occasionally noted but often resolve within a few months, however, permanent textural changes and scarring very rarely occur. If a patient is prone to pigmentary or textural changes, longer treatment intervals are recommended. Additionally, if a patient forms a blister or crust post treatment, it is imperative that they do not manipulate this secondary skin change. Early removal of a blister of crust increases the chances of developing a scar. Additionally, patients with a history of hypertrophic or keloidal scarring need to be warned of their increased risk of scarring. 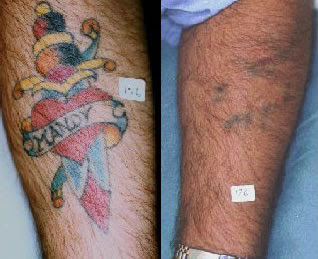 Local allergic responses to many tattoo pigments have been reported, and allergic reactions to tattoo pigment after Q-switched laser treatment are also possible. Rarely, when yellow cadmium sulfide is used to "brighten" the red or yellow portion of a tattoo, a photoallergic reaction may occur. The reaction is also common with red ink, which may contain cinnabar (mercuric sulphide). Erythema, pruritus, and even inflamed nodules, verrucose papules, or granulomas may present. The reaction will be confined to the site of the red/yellow ink. Treatment consists of strict sunlight avoidance, sunscreen, interlesional steroid injections, or in some cases, surgical removal. Unlike the destructive modalities described, Q-switched lasers mobilize the ink and may generate a systemic allergic response. Oral antihistamines and anti-inflammatory steroids have been used to treat allergic reactions to tattoo ink.

With the mechanical or salabrasion method of tattoo removal, the incidence of scarring, pigmentary alteration (hyper- and hypopigmentation) and ink retention are extremely high.

Although laser treatment is gold standard method to remove a tattoo, unwanted side effects of laser tattoo removal include the possibility of discoloration of the skin such as hypopigmentation (white spots, more common in darker skin) and hyperpigmentation (dark spots) as well as textural changes. Very rarely, burns may result in scarring but this usually only occur when patients don't care for the treated area properly. Rarely, "paradoxical darkening" of a tattoo may occur, when a treated tattoo becomes darker instead of lighter. This seems to occur more often with flesh tones, pink and cosmetic make-up tattoos.

Some tattoo pigments contain metals that could theoretically break down into toxic chemicals in the body when exposed to light. This has not yet been reported in vivo but has been shown in the lab. Laser removal of traumatic tattoos may similarly be complicated depending on the substance of the pigmenting material. In one reported instance, the use of a laser resulted in the ignition of embedded particles of firework debris. Read more at http://en.wikipedia.org/wiki/Tattoo_removal
Posted by Selena Anderson at 06:54 8 comments: Links to this post

Can I remove my old tattoo?

Can I remove my old tattoo? Many people have this question and they want to rid. Here I am discussing some tips to get rid with this problem. 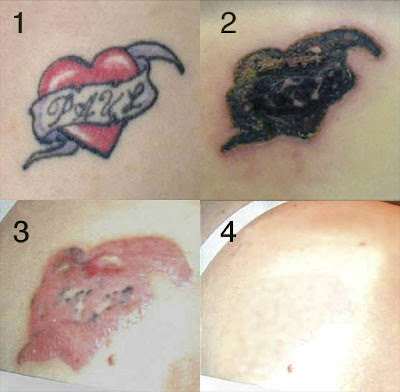 Methods:
Tattoo removal is most commonly performed using lasers that react with the ink in the tattoo and break it down. The broken-down ink is then absorbed by the body, mimicking the natural fading that time or sun exposure would create. All tattoo pigments have specific light absorption spectra. A tattoo laser must be capable of emitting adequate energy within the given absorption spectrum of the pigment to provide an effective treatment. 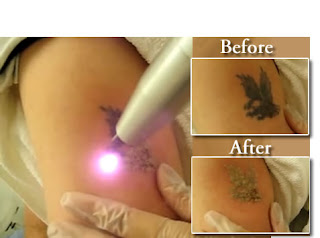 Widely considered the gold standard treatment modality to remove a tattoo, laser tattoo removal requires repeat visits. The newer Q-switched lasers are said by the National Institutes of Health to result in scarring only rarely and are usually used only after a topical anesthetic has been applied. Areas with thin skin will be more likely to scar than thicker-skinned areas. There are several types of Q-switched lasers, and each is effective at removing a different range of the color spectrum.

Another type of tattoo removal is the manual, or machine method. This practice is very unpredictable and uses a specialized type of gel, commonly mixed with saline, which is tattooed into the skin over the tattoo causing the ink in the dermis to bond with or be displaced by the gel and migrate to the surface of the epidermis. The incidence of scarring, tissue texture changes, keloids, prolonged healing, pain, discoloration (hyper- and hypopigmentation) and ink retention is extremely high with non-laser removal method; the person performing this treatment modality exposes him or herself to considerable liability. Methods like this are now only very rarely performed and in modern countries have been replaced by Q-switched laser treatment. Still other methods including thermal injury, dermabrasion and cryotherapy, are used but with the same unpredictable results and adverse side effects.

Pain management during treatment
Laser tattoo removal can be uncomfortable but is very tolerable in most cases. The pain is often described to be similar to that of hot oil on the skin, or a 'slap' from an elastic band. Depending on the patient's pain threshold, and while some patients may forgo anesthesia altogether, most patients will require some form of local anesthesia. Pre-treatment might include the application of an anesthetic cream under occlusion for 45 to 90 minutes prior to the laser treatment session. In very rare cases, if complete anesthesia is necessary, it can be administered locally by injections of 1% to 2% lidocaine with epinephrine.

Anecdotal reports have noted that patients receiving anesthesia by local injection will require additional treatments as the injection causes mechanical edema, spreading out the tattoo ink, which in turn makes it more difficult for the laser light to act on specific ink particles and may increase the risk of scarring. It has been reported that infiltration of local anesthesia will add an additional treatments.

For more you can visit at http://en.wikipedia.org/wiki/Tattoo_removal